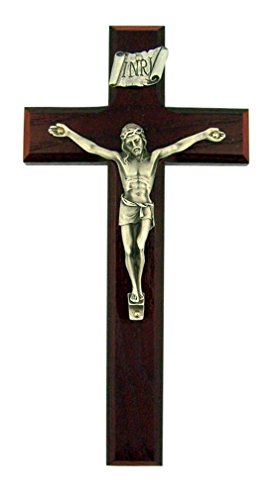 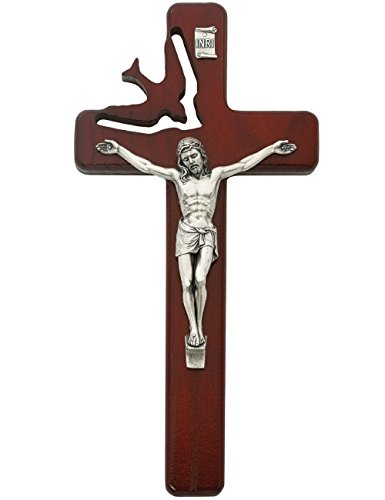 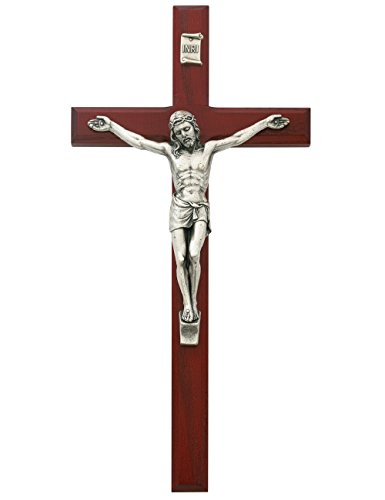 10 inch cherry wood crucifix wall cross. This beautiful wall crucifix has a Silver color corpis with INRI above Jesus. Made in the USA. 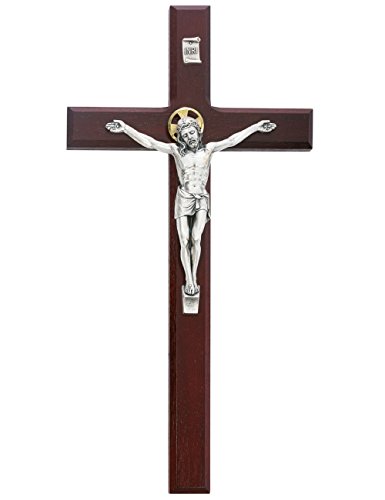 A beautiful beveled cherry wood wall crucifix cross. The corpus is a silver color and Jesus has a gold colored halo. The INRI is a silver color. The cross is 12 inches tall. Made in the U.S.A. 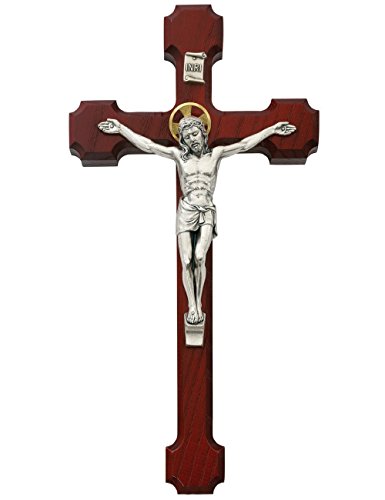 10 inch tall cherry wood crucifix wall cross. This beautifully designed wall crucifix has a metal Silver color corpis with INRI above Jesus. Made in the USA. 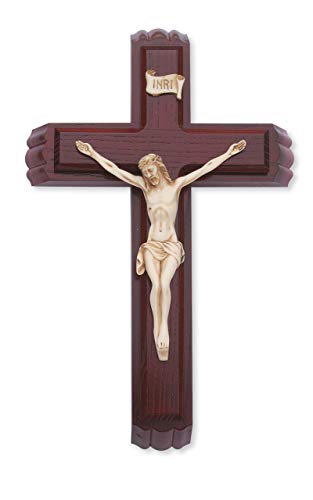 When a person is homebound, bedridden, or suffering from a severe ailment, Catholics are taught to call the priest. Decades ago the sacrament reserved for the very ill or dying was known as Extreme Unction (last anointing) or more commonly "Last Rites." Today we know it as the Anointing of the Sick, and it is not given exclusively to those who are on their deathbed. It is one of the seven sacraments and invokes God's divine aid for those suffering in a physical way. In days when people more often died at home, there developed the custom of having a "sick-call" crucifix on hand for emergency visits by a priest. This type of crucifix was hung on the wall of a person's home (usually above the bed). The crucifix contained a hidden compartment, revealed by sliding the face of the cross downward. Within the compartment were two candles, a small bottle of holy water and sometimes a white cloth. The purpose of the sick-call crucifix - they are still made today - is to facilitate the ritual connected to the Anointing of the Sick, making the bedside a sacred space for the sacrament. Interestingly, it used to be a popular wedding present, meant to be hung over the bed of a married couple, ready to be of used when a spouse was in need of an anointing. It reminded the couple of their commitme... 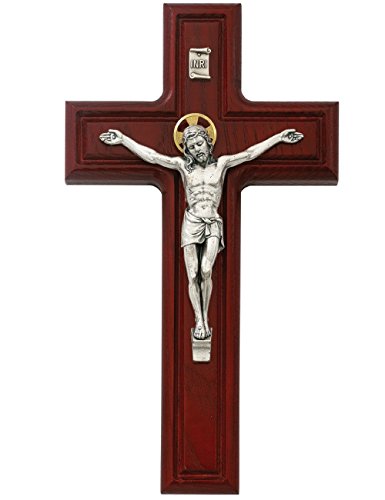 10 inch cherry wood crucifix wall cross with a metal corpis. Jesus is adorned with a gold color accent halo. Made in the USA. 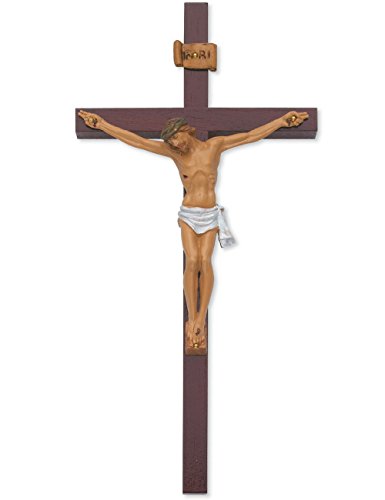 This beautiful cherry wood wall crucifix cross has an Italian corpus and INRI. The cross is 10 inches tall. Made in the U.S.A. 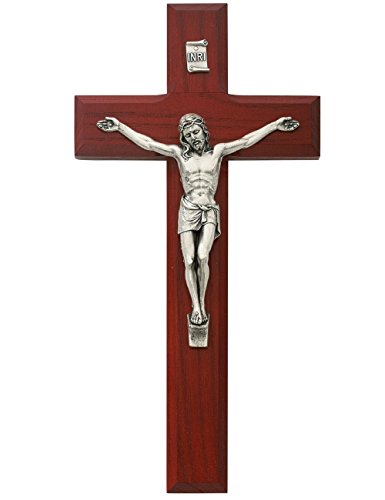 This is a beautiful cherry wood wall crucifix cross. The corpis is a silver color with an INRI plaque above Jesus which contrast well with the beveled cherry wood cross. The cross is 8 inches tall. Made in the U.S.A. 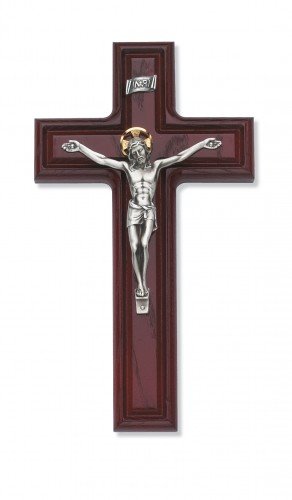 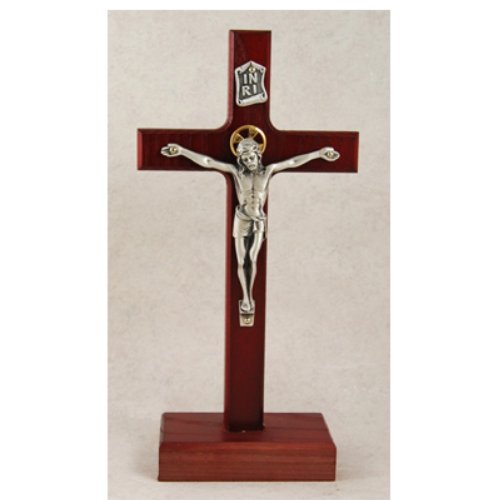 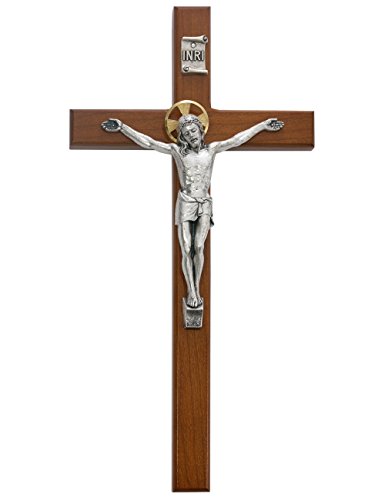 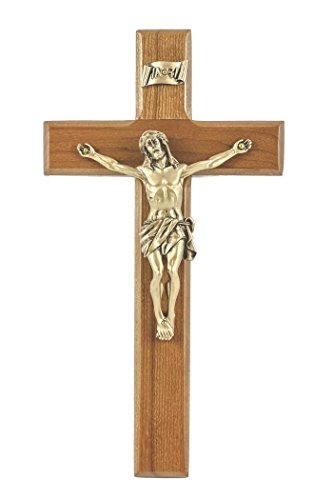 A crucifix is the Christian cross with the corpus (body of Christ), used within the Catholic, Eastern Orthodox, Anglican and Lutheran churches. The crucifix emphasizes Jesus' sacrifice - his death by crucifixion, which brought about the redemption of mankind. 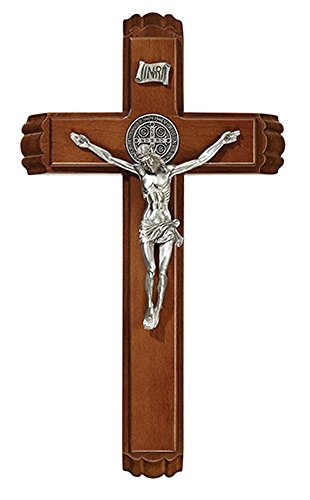 The Saint Benedict Medal is a Christian sacramental medal containing symbols and text related to the life of Saint Benedict of Nursia, used by Roman Catholics, as well as Anglicans, Lutherans, Methodists and the Western Orthodox, in the Benedictine Christian tradition. The medal is one of the oldest and most honored medals used by Christians and due to the belief in its power against evil is also known as the "devil-chasing medal". As early as the 11th century, it may have initially had the form of Saint Benedict's cross, and was used by Pope Leo IX. In widespread use after its formal approval by Pope Benedict XIV in the 18th century, the medal is used by Roman Catholics to ward off spiritual and physical dangers, especially those related to evil, poison, and temptation. This James BrennanTM St. Benedict Sick Call Crucifix features a two-piece deep cherry-finish cross and antique pewter corpus, and is designed to stand in its base open with candles or hang on the wall closed.